Only a few days left of my stay here at Grez-sur-Loing. Twenty-seven days have come and gone and in three more I'll go home. I'll never have a garden like this one again; I'll never have this field of green and green water accessible through my window or a minute's walk away through the door. I've been taking film footage with my camera - too shaky to show it here. I've also taken sound recordings with it, documenting the morning wake up of the immediate neighbourhood of collared doves, jackdaws and wood pigeons.

My word count now is up to 27,000. I don't say it's perfect; it's anything but. Yet having written that makes me feel as if I've done what I came to do. All the other things - the trips to Paris (to see the catacombs, which we missed both times), Fontainebleau with its chic and glamour, Nemours, much more down to earth and friendly; the walks to Bourron; the long trek to Intermarché in the mid-day heat, then having a picnic on a bench between the shop's double set of doors and a crazy route home; the dinner at the long red dining table; the hours spent sitting by the green gloss of the river; the sharing of work and discussions over art and culture; tasting Doux-chene Fermier goats cheese with ripe figs and apricots; the marvelling at the flair with a foreign language which the Swedish and Finnish artists show - this is a bonus as big as the word count. Bigger. This is one-off life-enhancing experience.

Here are some final photos from Grez and the surrounding areas. There's a Gite de France property in the village, so maybe - like the swallows who've all fledged now? - I'll be back.


Carol outside the Basilica of Sacre Coeur. Marina and I climbed the 300 steps to reach the dome.
Les jardins du Luxembourg in Paris, just outside the French Sénat. 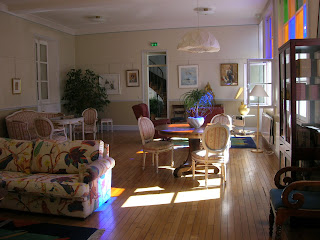 The living room at the Hotel Chevillon.
Idyllic writing room.
Carol and Marina in the red dining room.
I'd like to record my thanks to Creative Scotland (formerly Scottish Arts Council), the National Library of Scotland and all involved who gave me this once-in-a-lifetime opportunity by awarding me the Robert Louis Stevenson Fellowship, 2010. With a nod to Lou and the others who wander here, too.
Posted by Carol McKay Blog at 09:57 1 comment:

It's now mid-way through my 31 day stay at the Hotel Chevillon as recipient of a Robert Louis Stevenson Fellowship. Mid-way and yet I feel as if I've been here all my life. 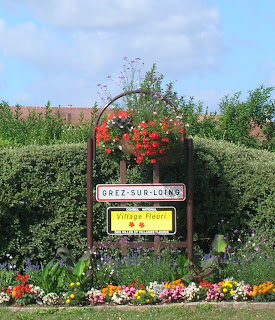 Keith stayed for almost a week but if he'd stayed longer, as we would both have liked, I wouldn't have given time to my writing and that is the point of being here, so leave he had to. 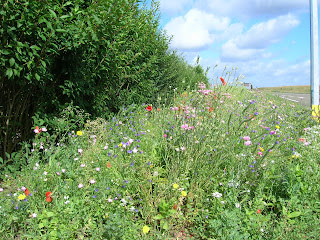 Since then, the paper journal I'm keeping has filled with various thoughts, impressions and musings. None particularly given by a 'muse', perhaps, but valid nonetheless as a record of my time here. I've also taken dozens and dozens of photographs of views ranging from the vast open plains to the tiny world of a grasshopper. Wild flowers, sewn (presumably) at the edges of the fields, also feature in my photographic record. Each photo is a souvenir but also a tool for research to draw on when writing. 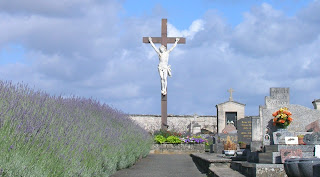 For the last week, I've set to work on writing the novel, the idea for which won me this fellowship. I've taken a huge sheet of paper (A2?) and have plotted out the entire story on a time-line. I know what's going to happen, now, and how it's going to end. All I have to do is write it! I like to plan my writing because once the plan is done the writing comes a bit like following a recipe or a knitting pattern. Or maybe the instructions that come with flat-pack furniture from Ikea (whose furniture fills this house). With writing - unlike with furniture from Ikea - there's always room for a little spontaneity, so the story as it's planned may not be the story that appears eventually on the page. Those damned, insistent characters will go and do something their author doesn't expect! 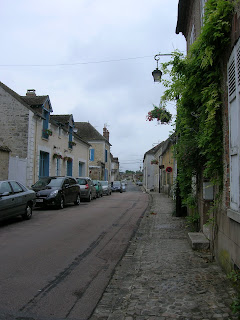 So far, in the last four days, I've banged in almost 10,000 words. First draft stuff, sure to be whittled down, but it's good to see the numbers in the left hand corner of the screen mount up. And there's so much time, here, with so few distractions! 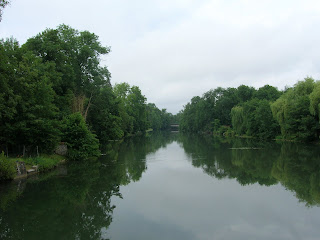 One distraction I did manage to find was the 14 Juillet celebrations. The little town of Grez-sur-Loing knows how to party. This photo shows the Place de la Republique early in the evening. After the majorettes had performed and everyone had eaten their fill of Moules Frites Fraiches and whatever the bar had to offer, the dancing began. Oh, the open air French family parties I remember from the past, when we lived to the south in Cap d'Ail! The air balmy but milder in the evening and heavy with lavender scent. The teenage girls unable to keep away from the dancefloor while the teenage boys are out of sight, frightening the townspeople by firing bangers, firecrackers, or whatever they're called. Then, the mothers and grandmothers dancing with the youngest ones while the fathers and grandfathers stand around, as strong a presence as the earth and winning points just for being there. And this Grez party was just like the ones I remember from the south, except that there was no Keith for me to dance with, along with the rest of the older couples, after the children had gone to bed! 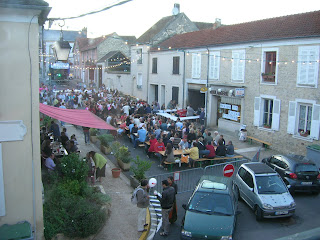 At eleven o'clock, the crowds flowed over the bridge and through the forest, young ones carrying paper lanterns held out on canes, half a mile or so to the lakes where the fireworks that followed mirrored themselves in the placid water. While the swans and ducks, presumably, hid their heads under their wings and tried to sleep!
Posted by Carol McKay Blog at 15:59 No comments:

And so we arrive, Keith and I, after the two day drive from home to here. Much delayed by two hours spent in 'bouchons' on the Paris road network - in 35.5 degree heat - we push our way through the heavy, double-height gates and into the courtyard. It's 8.30 in the evening; the stones of the raised terrace are hot from having banked the day's heat. Though we're still far from the river, the relative cool and shade on the terrace are as welcome as a dip there.


Dominating the terrace area is a tree whose crown of branches is so thickly packed with leaves that it looks like a great green pompom. The buildings on three sides of the terrace hold the upper garden like a sturdy chest with arms extended. Slightly dilapidated, slightly ageing, but with an air of permanence, the Hotel Chevillon welcomed us into its cour and its coeur.
We look a bit frazzled in these photos but that's because of the heat and the drive's long exhaustion. These two are taken on my mobile, just to record that we've finally arrived.
There's no one else here. The manager, Bernadette, has been in constant phone support while we were travelling but as we our delays grew longer and longer, she was unable to wait. The only other Fellow in the Hotel - a Finnish poet - is out. Imagine, then, walking through the doors and 'unpacking' the present that is Chevillon: the cool hall with its white walls and twisting, polished wooden staircase; the palacial sitting room with its blue and amber coloured glass and luxury furnishings that are a curious mix of antique and modern; the red dining area with its long and elegant table set with a red cloth and candles, and everywhere - on the walls, on the dressers - paintings and sculptures donated by the Fellows who've stayed here before us.
A note and an envelope containing keys and a welcome from Bernadette are on the bureau. Our apartment is on the first floor - up that grand but tired staircase and along the narrow wooden corridor. Our feet squeak on the seasoned wood as we walk past doors that are all locked. We arrive at apartment three, wondering if Robert Louis Stevenson himself might have lived here, and we step in to our two room flat, which is basic, clean and white. White walls, white bookcase and appliances, white painted French windows opening out on to the terrace and that tree, and white curtains. Two pine armchairs and a table that doubles as a desk (or vice versa) give the room some colour and the floor under our hastily kicked off shoes is cool blue. And of course, we are drawn to the window, opening it wide to let in the fresher air. Strange that that only picture I have to show this view is one taken two days later when the heavy rain came and removed all that excess heat from the air! 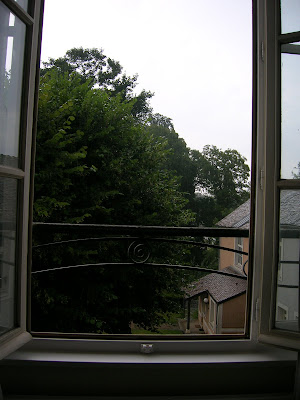 Perhaps the greatest surprise on that first day, after all the build up and all the expectation, is seeing the air filled with swallows. The garden is full of them, their flightpaths intersecting in what look like haphazard flightpaths without a control tower or collision. Graceful black and white birds slip through the air, crossing, rising and dipping, up into the height of the blue air till only a curve can be seen of them, then soundlessly down to feed their young in the wattle and daub nests clinging under the eaves and glued in to the corners of the window frames. They've come for the summer and so have we.
Posted by Carol McKay Blog at 16:48 No comments: