Tides and currents and family

What a crazy week. On Saturday, my two youngest children moved into university halls forty miles apart. We moved them both on the same day and all went well till a lorry went on fire on the motorway. Hey, what's a couple of hours' detour and delay when the sun is shining on Airdrie and Armadale and your passenger is eager to start her new, independent life? And how empty was the house once we got home? I swear, I think I saw a tumbleweed blow by the empty bedrooms out of the corner of my eye.
Monday came and with it the disappointment of a too-thin letter from the Scottish Arts Council, posted second class. Yes, all that effort and emotional investment, only to find out there was to be no Writer's Bursary for me this time. I did receive one in 2002 and it made such a difference to me - financially as well as psychologically. This time, I was hoping to be able to drastically reduce the number of hours I work for the Open University so that I could concentrate on writing a novel set in the present but with historical mini-narratives within it. Needs a lot of research time. A lot of alchemical dream time to be able to integrate facts gleaned from historical sources with creative visualisation, imagining the character in his environment. What can he hear, smell, touch, taste, see around him? Ach well, nae luck. File 'Salt and sand' at the bottom of the pile for a wee while.
Yesterday (Thursday) we had a case of Facebook-inspired near hysteria after a fairly cryptic comment was posted by my son-in-law Aldo. Dear Aldo. It really wasn't his fault but those of us waiting for news of my daughter Ruth's pregnancy 7000 miles away interpreted it as meaning Ruth was in labour four weeks early. After many fairly anxious hours and several attempts to contact them - and some further inconclusive messages on Facebook - all was revealed. Indeed, it was a matter of fertility but only of the imagination. Ha! Well, the time will come and we will be waiting!
Sprinkled through the crazy week were many skype webcam calls to daughter Alison in Tokyo. Ah, poor Alison. Missing her man. How fate teases us! She met him and fell headlong down the well of love three or four months before she was due to spend her year in Japan. As Rabbie Burns said so much better than I can - the best laid schemes o' mice an' men gang aft a-gley! 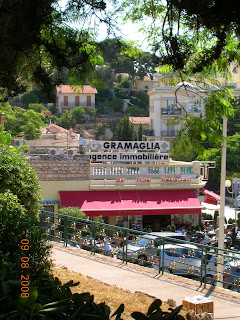 Throughout this week, while the ripples and swells of my daughters' lives have tugged and carried me, the deeper current has allowed me to make more of a return to writing. I'm working on a fairly light, contemporary novel set in the south of France and I'm aiming to write 5,000 words a week over the summer. Last summer I wrote 42,000 words of it and so far I've taken that up to 69,000. The target is 80,000 but as I always have to edit my writing hard to remove loadsa gibberish and flabbiness, I suppose I really need to aim at 100,000. Hmm. With OU work starting again late September I guess that's not going to be easy. However, until January I'm only teaching one of my usual two courses so I'm optimistic I'll be able to get there. More on 'A spell in the south' in a future post.
Posted by Carol McKay Blog at 09:08 1 comment:

Writing tips - Do something different!

It's hard to be sparkly in your writing if you don't feel sparkly in yourself. If you're looking for inspiration or motivation to write, these tips might help you.