What's in a name?


I received an email a couple of weeks ago from someone called Carol McKay. At first, I thought my own email address must have been hit with a virus and I was spamming myself, but then I read the first few lines and realised this was an email from another Carol McKay. Like me, she said, she was a writer. She went on to say she would need to use a pen-name to avoid confusion, since I'd already bagged her real name.

In fact, there's another Carol McKay out there in the publishing world, too. She's the one I hope most sincerely people don't think is me. I mean no disrespect, here, but our writing styles and subject matter are very, very different and, to be honest, I was really quite angry when I realised that Amazon in the USA had allowed her to use the same name as me. Already, one friend has told me he bought her novel at the same time as he bought my short story collection, thinking both were mine.

In the world of big business, no two companies would be allowed to use the same name. Branding is that important. Is it different in publishing? I'm not likely to try to take someone to court for using the same name as me, even though I did get there first!

When I worked with Eileen Munro on her autobiography, I was dimly aware that there was another Eileen Munro out there, with a big reputation. Her writing's in the same field as Eileen's biography, except that she is a highly regarded professional commentator on child abuse, whereas the Eileen I was working with writes about being one of the victims. That Eileen had changed her name to Munro to reflect the mountain she'd had to climb to get free from her past (a munro being the name for a mountain in Scotland higher than 3,000 feet). In my opinion, it was a worthy and inspired name choice. How could I then go on to say that I didn't think she should use it? English language publishing has a global sweep and surely there must be some name overlap?

Anyway - back to 'Carol McKay'. Bear in mind that there may be more than one of us out there on the Amazon shelves. If you're looking for me and you want to be certain, you could look at my author page on Amazon.

Incidentally, the Carol McKay who already has books out has written a novel about the life of a character from the Bible and it's very Christian in tone and outlook. That's not the issue I have with it. In my opinion, it's poorly written fiction, and that could seriously damage my reputation.

Just a quick note this time to mention the Edinburgh E-book Festival which is taking place wherever you are now.

Running 24/7 and completely free of charge, this book festival is pretty unique. The brainchild of writer Cally Phillips, it's being held worldwide, online. Every day between 11 and 27 August, new features are being launched, and the site will stay open long after that, giving everyone access to all the features well into the foreseeable.

So what's on? Well, I'm there on August 26!  I'll be featured under Writers' Pieces and will have my short story collection Ordinary Domestic reviewed that day, too. The Writers' Pieces feature is about writers discussing how and why they got into writing as well as their attitude to e-books. It's a slot that's launched at lunchtimes (a 'piece' being Scots for 'sandwich'). Some of the authors are available to chat over Twitter and Facebook, too.

But this isn't just a wee nod to me and what I'm doing. Oh no - there's loads more than that. There's new, original short fiction on the site every day, and new poetry. All for free. There's discussion of indie publishing, opinion pieces, reviews and lots more. Definitely worth a visit. More than one.

Why not check to see what's on at the festival today?
Posted by Carol McKay Blog at 11:58 No comments:

Last week was a good week for me because I received two extremely favourable reviews for my e-book Ordinary Domestic: collected short stories. 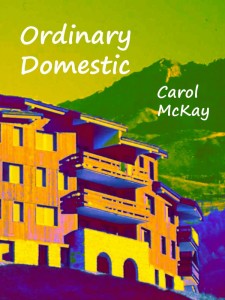 All the big emotions come to me when I think about how I felt when I clicked on the link to read the review in Northwords Now magazine (issue 21, Summer 2012). Trepidation, anxiety, fear of failure, fear of ridicule. No wonder my body no longer produces the stress hormone Cortisol any more. I've used it all up in fretting over the years!

So, it was a great relief to me, more than anything, to read Alison Napier's generous and considerate write-up on my fiction. Here's part of what she said -

'Ordinary Domestic is a collection of short stories and this book made me deeply happy.  Not because the stories were joyful and uplifting (though a few of them were) but because they made me think and feel, wince and shudder, even on one occasion, cry. Carol McKay’s skill is in the compassion she conveys for her characters regardless of their flaws or the chaos of their lives. ...

Her stories are unpredictable. They are naked and brave, rich and troubling. She writes about the awkward topics (disability, adoption, incest, sexual violence) with such deceptive ease that it is our own discomfort and prejudices that we bump up against, not those of the author’s.  Never assume you know what will ‘happen’.  Often little does.  But that little will be a beautifully judged, finely tuned, deeply perceptive piece of perfection and you will be glad that you lived those minutes of your life reading these words.'


Could I ask for a kinder review than that? You can read Alison's full review in the Northwords Now website here.

This review was followed only two days later by an equally generous review on the Amazon site by David Manderson, a writer with a gift for creating flawed characters who are sublimely human. Here's what David said about Ordinary Domestic -

'The title, like everything else in this collection, is dangerously deceptive and deeply ironic. 'Ordinary' and 'domestic' these stories may be, but they are laced with dark emotions and deep, hidden desires. They also never fail to surprise.

The author talks in the voices of the marginalized, the robbed, beaten and raped, the dispossessed. That she finds humanity not just in them but also in their persecutors is a measure of the power of her quiet, lethal understatement.'

Could I ask for a better review? What pleases me most about this one is that David has expressed exactly what it is I try my best to do in my fiction.

David Manderson is the author of Lost Bodies - a novel well worth reading.

Posted by Carol McKay Blog at 10:11 No comments: