Not good, not bad - but different!


When you've been fed a diet of film and TV stereotypes about Mexico, from the innocent mouse Speedy Gonzales with his cry of 'Andale! Andale! Arriba! Arriba!', to the ubiquitous seedy, untrustworthy bad guy from spaghetti westerns, tipping his sombrero back from his face with the troublesome end of a gun, you have to blink a few times when confronted with the reality. Hey - Mexican people are just the same as my people.


Sure, there are differences. In my role as a woman on the doorstep of la troisieme age, the kinds of things that strike me as really different from my British upbringing are connected with home life. I present them here, these Mexican ways, not to say they're wrong. Just different. Examples:
To a Scot like me, these practices seem bizarre. Maybe it's to avoid the sun; maybe it's to protect the children from Mexico City's serious air pollution. Or maybe it dates from before the virtual eradication of malaria-carrying mosquitos by DDT forty-odd years ago. I could see that protecting a baby from them would make perfect sense.

Here are some others:

I've clearly been spending a lot of time around a baby. And navel gazing. But there are other domestic curiosities. Examples:

In addition to these cultural differences are some which seem to me to make perfect sense. Examples:

Cleanliness is paramount. The recent Swine Flu scare has led to an even higher campaign for people to wash their hands regularly. When visiting a selection of public toilets (I am a woman with her foot on the doorstep to la troisieme age, as I said) not one person coming out of a cubicle skipped out of the loo without first giving her hands a good scrub. Compare that with Glasgow's Buchanan Bus Station toilets and I know who will get my rosette.
All in all, it's an interesting experience. I guess it's true what they say: travel broadens the mind. It certainly exercises it.

Perhaps the most interesting of all is the poor - a far cry from 'the improvident poor' of Britain's past, and probably even present (but I'll leave that discussion for another day). The poor in Mexico City work for their living. An endless, thankless round of labouring, hand to mouth.
Whether they're on the minimum wage of 50 pesos a day (£2.50), perhaps in a smart uniform, guiding you as you park your car in the posh new shopping centre underground carpark; or whether they're threadbare and threading their way between cars stopped at the traffic lights, offering for sale a selection of phone cards, disposable lighters or chewing gum; or whether they're spraying your windscreen with soapy water from a soft drink bottle then squeedgee-ing the foam away for a few pesos a car before the stampede begins as the lights change, they're working to earn their way. Even four and five year olds tout beads or simple toys round the restaurant tables, constantly appealing. In both senses. Surely someone must buy their charms.

As I type this, I can hear, in the near distance, sirens wailing, aeroplanes and helicopters passing and the spiky punctuation marks I've been told are probably gun shots. Perhaps some stereotypes may hold good.
But I haven't yet heard a mouse shout, 'Andale! Arriba!'

Interspersed with this text are some photos we took in one city oasis called Parque Mexico.

Posted by Carol McKay Blog at 04:30 No comments:

City of contrasts on the Day of the Dead 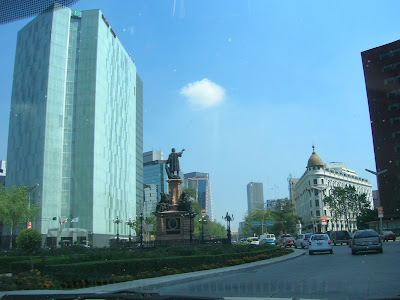 Mexico City - or DF as it's known here - continues to enthrall and perplex with its fast paced, pot-holed highways, its polished modern office towers and local streets strung with black wires and leafy trees. As much of a Jekyll and Hyde city as Edinburgh (on a much larger scale), it feels as if there's a battle going on in its streets between its colonial Spanish past (the monument above is to Christopher Columbus) and a will to use its major petrol resources to build a city to rival any in the lands of the major powers. TV adverts several times a night extol the virtues of the present government in its fight against drugs, the organised crime that control them, and to build a secure and prosperous nation for all of Mexico's inhabitants. 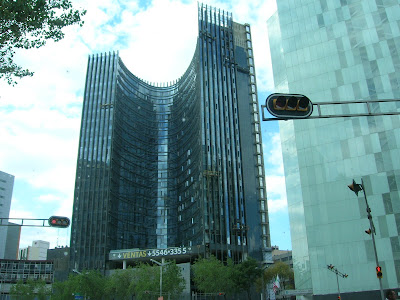 With baby Mhairi Itzel now more settled and sleeping peacefully whenever she's in the car, or out in the fresh air, we were able to spend a few hours exploring the city streets and ended up having a traditional Mexican lunch at the Cafe de Tacuba - a lavishly decorated dining hall with a vaulted ceiling, walls hung with ornate framed, full length portraits of eighteenth century Spanish worthies and wall panels painted in frescos or tiled with gaudy, glorious Mexican craftsmanship. It being Day of the Dead (when all the dead have come back overnight), the waiting staff were dressed as nuns. 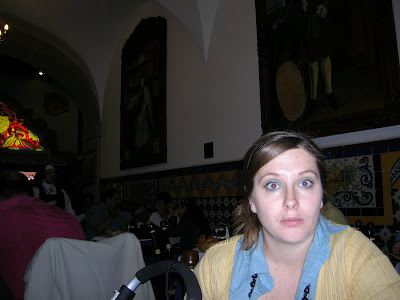 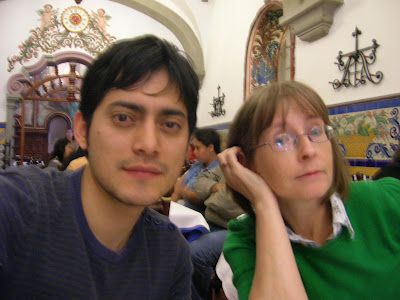 After lunch, we drove to the main square - the Zocalo - but didn't find it festooned in orange from the marigold ofrendas to commemorate dead loved ones. The few that we did see had had their petals scattered by the tail end of hurricane winds that had hit the Pacific coast. Despite that, the vast Zocalo, thronging with people enjoying one of the few open spaces in this crowded city, is worth visiting for its ornate Cathedral and its traditional healers, whose rhythmic drums, aura-cleansing smoke and hopping dances alter the passer-by's mind state through a bewildering sensory immersion. 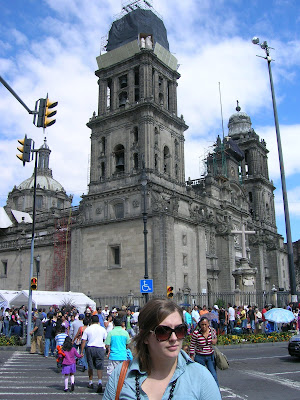 And back home, we had our own little ofrenda, commemorating my late mum, dad and brother - all Scottish - and Aldo's Mexican grandparents. Little would they have expected they'd be linked after they'd gone, in beautiful little Mhairi Itzel. 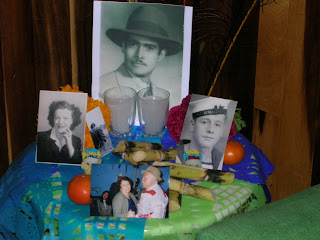 Posted by Carol McKay Blog at 15:00 No comments:

One week into my three week stint in Mexico City. My daughter, Ruth, had her first baby ten days ago and I've come over to try to give her a bit of moral and logistical support. 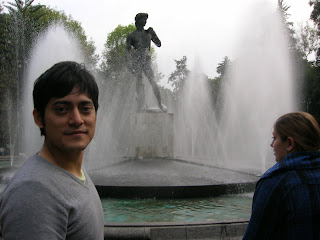 It's wonderful to watch Ruth and her partner Aldo with their petite daughter (or should that be 'chiquitita'? Wonderful to see the tenderness and the patience. Little Mhairi Itzel (one name Scottish, one Mexican, as a nod to her heritage) is cuter than cute with her head of long black hair that won't lie still and the depth of those liquid, navy blue eyes. I've opened a book on whether she'll have brown eyes like her dad, or blue-grey like her mum, once her true colour comes in in a few weeks. 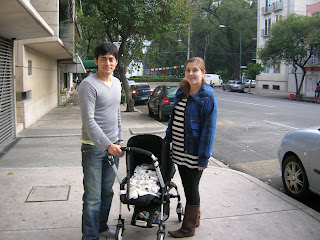 Like all new babies, she's finding her first few weeks of life a bit strange. So, she's at her most content at the breast and at her least content during the night when she finds herself alone and awake and doesn't know what she's supposed to do. Bath-time is a mix of fun and terror for her, I think. She adores the water - so close to what she knew for nine months in the womb - and has begun to be able to anticipate it, uncomplaining when 'sus padres' undress her in readiness for her swim, but can she squeal when it's time to come out and get dried! Ask the people on the floors above this flat! 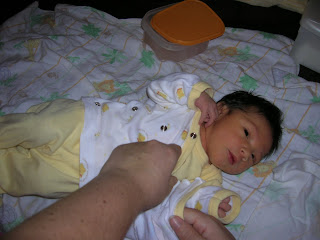 Though, actually, the neighbours make their own share of noises. Dogs barking, clicking heels on the stone tiled floors, voices in the entrance hall. And, of course, the Elvis aficionado directly above us! Ah, Mexico City - home to 25 million people!
Crazy, crazy, chaotic city. A curious mix of poverty and excess. Of colonial hangovers in tree-lined streets and flat roofed houses with balconies, and ultra-modernity in the skyscrapers of the petrol and telecom giants. 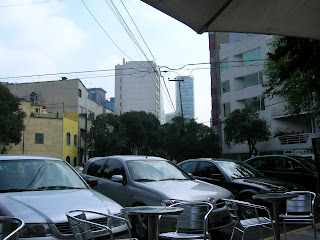 Posted by Carol McKay Blog at 23:26 No comments: