When I was diagnosed with Addison's disease a little over two years ago, I felt very isolated. Addison's is life-threatening. Around the world people die from it, and I only survived because I had access to good doctors and modern medicine - steroid hormones to replace the ones my body no longer produces.

Addison's affects only 14 in 100,000 people. So, in Scotland, with its population of five million, there may only be about 700 people who understand it. There are no local support groups, and I really missed being able to speak with fellow Addisonians to find out how they coped with the physical and psychological shock of ill-health, diagnosis and aftercare.

In summer 2012, I put out an appeal on one of Facebook's Addison's groups and set out to commission stories from Addison's people around the world.  I wanted honesty, but I wanted, also, something uplifting. Something that demonstrated that people could be struck down by this illness, but could take control of their new health regime and live a full life. 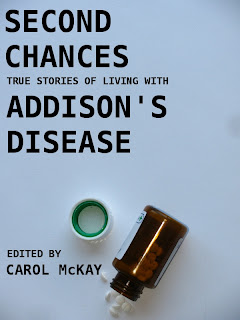 I was privileged to work with fifteen men and women who shared their experience with me. They shared their stories because they, too, understood that sense of isolation newly diagnosed Addison's people feel, and because they wanted people to know more about this rare condition. In addition, my endocrinologist very kindly supplied the ideal medical preface to the collection.

The contributors come from the UK, Canada, the USA, Belgium, South Africa, Australia and South Korea, and their stories are all different, since their lives are all different. One thing is the same - they all want to make the most of the second chance modern medicine has given them.

'Second Chances' has been published as an e-book by PotHole Press, and is available on Amazon around the world for Kindle. Versions formatted for I-pad, Kobo and other e-readers will be available soon.