This week, I meet a master of the craft of short story writing - author Gillean Somerville-Arjat - and chat with her about her collection Uncle George and the Cacti

Here’s a really satisfying collection of short stories – mellow, sonorous and rhythmic in language, heady with sensory observation and insights. Gillean’s narrative voice has warmth and conviction. It’s inclusive, holding the reader with security and confidence. Her stories are multi-layered, deeply knowing about the conflicts and quandaries of human life, and never cosy. They wrap themselves around you. Set in locations as diverse as the Lisbon, Morocco, and the rocky edge of a mountain in the Scottish Highlands, they are utterly convincing in their evocation of place and time.

Take this extract from ‘Poetry in Lisbon’ as an example –

… there were days when the Tagus gleamed blue and sparkled in the sunlight. On one of those, they’d crammed themselves into a tram that carried them up the narrow winding streets to the Alfama district with its precipitous staircases and winding alleyways. Lisbon had retained its old trams. In contrast to the smooth-gliding modern ones, they rattled like bustling yellow beetles, wobbling up the steep slopes, wheezing, clattering, clanging, delighted tourists filling every available space. (p.25)

Gillean’s characters appraise their lives against these backgrounds, pre-occupied, looking for work, tending vegetable gardens or climbing rocky paths. Sometimes the author and her characters grapple with questions of politics – the legacy of the bank crash, passions on both sides of the Scottish independence debate, the harsh realities facing migrants into Europe.

Sometimes they’re contemplating age and the prospect of loss – or its immediate impact. In ‘Poetry in Lisbon’, a woman evaluates her past while being moved by a connection with a young poet in the present. It’s wistful and poignant, but life-affirming. There are stories of the dispossessed. Some retell Ancient Greek myths. Some have streaks of irony and humour, while others employ high-end elements of the crime genre to create richly satisfying studies of human motivation, most notably ‘It Is the Cause’.

‘Interlude in Venice’ is a longer story in three parts. Set in an earlier era, it features an adolescent girl whose future is precarious after her father dies when loading building stones into his canal boat. Her future is taken out of her hands by family members who aim to provide for her in a way that’ll keep her off the streets, albeit not that far away from them. With its different take on the idea of the painter and his muse, this story of disappointment, powerlessness, learning from lived experience and moving forward sees the young woman reclaim her right to decide her own destiny, and gives the reader a very satisfying ending.

In ‘Under His Skin’, a young man ruminates on his life, feeling sour, disillusioned, angry. School didn’t work for him. He remembers sharpening a pencil. Once he lifted up the basket and tipped it out over his head. That got a big laugh. No. School was a joke. What did he have to show for it? A few Foundy Standard grades, that’s what. And where did that get you? Fucking nowhere is where. Packing meat. On the dole, is where. (p.145) Now, he’s fixated on a slouchy old man he resents so much he resolves to find what the reader dreads might be the worst possible escape route from his disempowered life.

I took notes while reading this book. When I came to the title story of the collection, the only comment I jotted down was, ‘Awww beautiful. Perfect.’

It’s the quiet, internal shift in the thought-processes of the characters that is most gratifying in these fictions: that subtle realisation and resolution that are typical of the absorbing, deep-dreaming quality of Gillean’s writing. These are stories that reward close reading. Uncle George and the Cacti is a collection to linger over and return to.

CMcK: Hello Gillean. I’m so glad to have you as part of my lockdown book blog project. Uncle George and the Cacti is a truly mesmerising collection of short stories. Tell me something about the background to it.

GS-A: Thank you very much, Carol, for giving me an opportunity to talk a little about my collection. The stories were all written after I retired, now over a decade ago. I had had the odd story, the odd poem, the odd article published years before, but with a living to earn found it difficult to combine writing with the demands of secondary school teaching. Some people seem to have the energy to do both, but I couldn’t. I joined the Edinburgh Writers’ Club, which has an annual programme of talks, workshops and competitions, and a lively writing group at the Scottish National Gallery where we combined looking at paintings and subsequently writing about them and critiquing each other’s work. I also heard about Crime and Publishment, which you know about, a group which, aside from pandemics, hosts an annual crime writing weekend for keen crime writers near Gretna in the Scottish Borders. I’ve attended three of those. All these, combined with reading a shelfload of books about writing, meant that I eventually accumulated a number of stories that I felt had enough merit to publish. But I’m getting on now, agewise. I didn’t feel I had the time to send the script out to publishers and wait for rejections. Short stories don’t sell as well as novels, unless you’re an established name, and publishing is a commercial business. So, with the help of some friends and a day session at the Amazon Academy in Glasgow, I decided to self-publish and although selling myself seems to be a gene I lack it’s a decision I don’t regret.

CMcK: You have stories set in Morocco, Spain, Lisbon, Crete – and Scotland. How did these places come to feature in your stories?

GS-A: The only location I haven’t visited among these is Crete. My impression of it derives from my classical education at school, where I studied both Latin and Greek, and was fascinated by the old myths and legends. It’s on my bucket list though. However, nearly forty years ago I went on holiday to Morocco in an open-sided truck with a group of like-minded young professionals. We toured the country from Ceuta in the north to Zagora in the south, taking in the cities of Fes and Marrakech en route. We camped mostly, but in the cities we stayed in hotels. It was a memorable trip and in Fes I met this guy who made an impression. I went back, we became friends and a few years later I brought him to Scotland and we got married. We still are, happily. During that time we spent a few weeks almost every year visiting his family and so I got to know the culture pretty well. One of his sisters is settled in the south of France in a small village between Nîmes and Avignon. She now has a grown up family dispersed around France. Later another sister settled in a seaside resort in Spain, just an hour by train north of Barcelona. These have been great places to combine family visiting with going on holiday. We have also visited Portugal twice on holiday, once to the Algarve and once to Lisbon, where I did meet the young poet who features in my story, although in reality we simply said hello and I asked him about his writing. The story is otherwise a fiction. I visited Venice many, many years ago, but that story was actually inspired by a small, possibly unfinished, watercolour by J M W Turner of his hotel room in Venice that featured in a 2009 exhibition 'Turner in Italy' in the Scottish National Gallery. 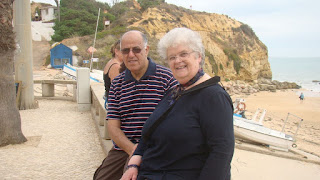 CMcK: I’ve spoken about the quiet internal shift in the characters’ consciousness at the end of many of your stories here. Yet there’s a fair bit of action, too, including crime. What’s important to you when you set out to write?

GS-A: That’s an interesting question. I don’t have a formula. Each story is different and they just seem to evolve. I start with a character or two in a setting and then something happens to trigger a change, or a revelation or a shift in perspective. Often it arises from personal experience. I’m not really attracted to fast-paced, high octane action, or torture, or putting someone through serious pain, one reason I don’t think I could ever be a proper crime writer in the contemporary sense. I’m more interested in motive and psychology. When I was a little girl I wanted to be a detective. Later I would have liked to study psychology, but I wasn’t good at maths. I got a lot of psychology from studying literature though. I love the great 19th century novels, English, French and Russian.

CMcK: What’s next for you in your writing? And where can we buy Uncle George and the Cacti?

GS-A: Uncle George and the Cacti is available on Amazon, either as an ebook or in a printed version. I’m really pleased with the cover of the print version which was designed by a young Indonesian artist I found by chance on Fiverr. I liked what she had showcased of her work and she was so nice and helpful to deal with. As for what’s next? I’m still working on a crime novel, which has gone through several rewrites since I first had an idea for it back in 2013. I got stuck about two thirds of the way through. I know what the ending is to be, but it’s going to involve a change in tone from the first two thirds and I’m having difficulty getting into the zone to complete it. I just have to concentrate and avoid distractions for a bit. I also write a regular fortnightly column for the online Scottish Review and hope to continue writing short stories.